A multiboot system: the Windows bootmanager vs. an alternative bootmanager

This page is about setting up an multiboot system: installing multiple operating systems on one computer. This could be a combination of Windows 98, Windows XP, Windows Vista and/or one of the many other operating systems (like a Linux distribution). A bootmanager is used to show a boot menu to let the user choose between the installed operating systems. Thanks to this boot menu, it is simple to boot every operating system.

The Windows bootmanager vs. an alternative bootmanager
Before setting up a multiboot system, it is important to understand how it works. This page first describes how the Windows bootmanager (the most used bootmanager) works. This information is important to understand the disadvantages of this bootmanager. These disadvantages could be evaded by using an alternative bootmanager, which is described next. The page finalizes with the information how to create a multiboot system by imaging one primary partition (with a already installed and optimized Windows) to another primary partition.

The basic concept of the booting process

Because of the complexity of multiboot, here are some of the basic concepts concerning a multiboot system:

TIP: For more information, visit the page about partitioning the hard disk.

If multiple primary partitions are created, installing an additional operating system is quite simple. The Windows setup shows which partitions are available to install Windows on and asks which to use. The new Windows installation will be added to the boot menu of the already installed bootmanager (on the active partition). In those cases, the bootmanager is used by default, which results in the following boot process:

ATTENTION: In the most common situation where only one Windows operating system is installed (a computer without multiboot...), the bootmanager is loaded but doesn't show a boot menu. Windows is started immediately without the interference of the user.

Making changes to the boot menu of the Windows bootmanager

Changing the BOOT.INI (Windows XP)
The BOOT.INI file in Windows XP is stored in the root of the active partition and can be viewed and changed with a simple text editor. This file is opened by the sub System in the Control Panel, tab Advanced, button Settings at the sub Startup and Recovery, button Edit. This procedure disables the file protection temporarily and opens the file automatically with Notepad. Be careful in making changes to this file: typing errors can result in boot failures!

In the example below shows the content of a BOOT.INI file belonging to a multiboot system with three different Windows XP installations (Windows XP Home, Windows XP Pro and Windows XP Media Center Edition). The timeout of 30 will show the boot menu for a maximum of 30 seconds. When there is no input from the user, the operating system mentioned at default will be booted by default. If there is only one row below operating systems, this will be the default as well and booted immediately at startup without showing the boot menu.

Windows Home, Pro and Media Center are respectively installed on the first, second and third primary partition. In those three cases, the system files are stored in the folder WINDOWS of these partitions (this is the default folder for system files used by Windows).


Changing the BCD (Windows Vista)
The BCD used by Windows Vista is stored in the folder boot on the active partition and can be edited with the command BCDEDIT. While the file BOOT.INI within Windows XP is easily edited with Notepad, it takes some effort to understand the command BCDEDIT. This command is that complicated, only a few know how to apply it. Fortunately, the BCD can be edited by using a tool like EasyBCD (download: www.neosmart.net/dl.php?id=1). And these kind of tools prevent making errors as well!

The example below shows the use of the tool EasyBCD. The button View Settings shows the current settings of the Windows Vista bootmanager. The buttons Change Settings and Add/Remove Entries can be used to make changes to the BCD, like changing the default operating system, changing the boot menu order or removing a Windows entry from the boot menu. When an operating system has been removed from the BCD, the accompanying system files can be removed using the Windows Explorer of one of the other Windows entries. 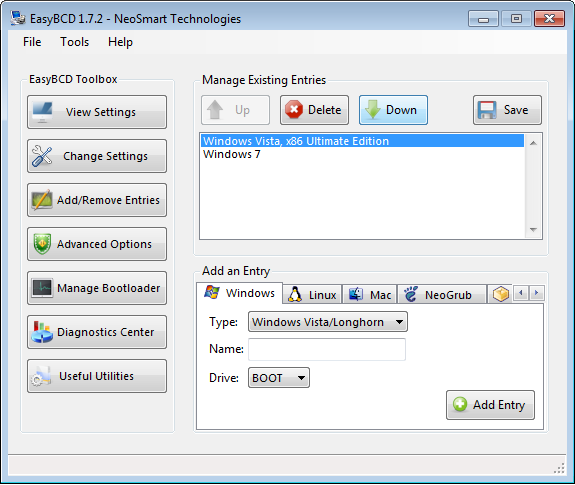 The disadvantages of the Windows bootmanager

As described above, creating a multiboot system while using the default Windows bootmanager isn't difficult: just install Windows more then once on different primary partitions. When the computer start, a boot menu is shown with the installed Windows versions. This method is effective and almost always error free. But using the Windows bootmanager has some disadvantages as well, but you rarely read about it.

Alternative: starting a bootmanager from the MBR

ATTENTION: Not every alternative bootmanager has to be loaded into the MBR (like the Linux bootmanager GRUB, www.gnu.org/software/grub)! Some of them are also able to use a specially reserved area of an active FAT partition, but this method is not discussed here.

The labels of the system partitions are changed automatically
By placing the bootmanager into the MBR, the primary partition belonging to the Windows to be booted can be activated and made visible automatically, while the other primary partitions will be set to hidden simultaneously. The necessary changes to the partition table are applied before the Windows operating system on the active partition is started. Because the active partition changes depending on the chosen Windows system in the boot menu, every Windows operating system uses it's own bootmanager (having a boot menu with only one entry which is booted by default).

TIP: MasterBooter <this tool is no longer available> is an example of an alternative bootmanager which uses the (limited) free space between the MBR and the first partition. For this reason, the graphical interface of the boot menu looks old fashion, but the bootmanager does it's work properly! Visit the page about MrBooter for more information about using this bootmanager.

Copying Windows from one partition to another

So, it is quite easy to setup a multiboot system using an alternative bootmanager: Windows is installed multiple times on a primary partition made active prior to installing Windows. However, to setup a multiboot system with the same Windows version twice or more, it is better to copy the already installed Windows (lets say OS1) to one of the other primary partitions (OS2). This can be done by restoring an earlier created back-up of the operating system OS1 to the partition for OS2 or by copying the operating system directly from one partition to the other using imaging software like Partition Saving (download: www.partition-saving.com).

Alternative bootmanager is needed after imaging Windows
Although this procedure saves a lot of time because Windows only needs to be installed and optimized once, there are also some disadvantages. In case the Windows bootmanager is used, there are immediate problems with the assigned driver letters. The copied Windows installation (OS2) doesn't know better then it is installed on partition C: (just like the original Windows), while this hard to realize using the Windows bootmanager! By using an alternative bootmanager in the MBR, this problem does not occur because every Windows installation is able to use the drive letter C:.

Don't forget to change the BOOT.INI/BCD!
After copying the Windows installation, it is also very important to change the boot information used by the Windows bootmanager of OS2. The BOOT.INI (XP)/BCD (Vista) of the OS2 partition needs to be changed to make sure that it doesn't use the same (original) partition for the registry files.

When the BOOT.INI/BCD is not changed, it will result in irreversible problems in both OS1 and OS2 as soon as critical changes are made to one of the Windows installations. In the beginning all seems to work fine, as long as there are no critical changes... This is what happens: registry changes in OS2 (like a change in the Windows XP-services/Windows Vista-services) are applied in the registry files stored on the partition of OS1, even when the partition of OS1 is hidden for OS2! So, registry changes of both OS1 and OS2 take place in the registry files belonging to OS1, while the changes in the (system) files belonging to these registry changes are stored on or removed from the partition of the active Windows installation of that moment. which makes them invisible for the other Windows (if the partition would not be hidden, the files aren't accessible by their original drive letter as well).

Such a situation would result in big problems for sure! This situation is identified easily by making some changes in the registry and notice what happens in the other operating system (like moving a shortcut on the desktop of OS1 and to verify if this is the case in OS2 as well). If they still use the same registry, then the BOOT.INI/BCD of the copied partition (OS2) needs to be changed to make sure it points to the right partition.

Would you like to know more about making these changes to the BOOT.INI/BCD, read the page about setting up a multiboot system with MrBooter.